Unlike dogs and cats, parrots need a different way to identify their gender. And as you know, this is because their genitals are not visible, and instead of trying to look, you need a different approach to determine whether your parrot is a male or female. This article is for you if you are going to attempt breeding parrots, or you are just curious about what gender is your lovely pet parrot.

3 Methods to Identify Your Parrots Gender

For whatever reason, owners might want to know the gender of your parrot and I highly recommend following one of the 3 methods below, do not take your parrot to a vet and allow him to put your parrot under anesthesia for the sake of knowing what is the gender. I believe such an operation is harsh for your birds, especially when you have another less costly option you can follow.

You can tell what gender is your parrot just by looking at the differences between males and females. It is a little harder if you only got a single bird, so you don’t have another individual to make a comparison. Some breeds are dimorphic, like Eclectus parrot. other breeds do not have any special marks.

You can also compare how your pair normally behaves. Males are more likely to seem outgoing, curious, talkative, and aggressive. Females show less of these behaviors. Size is also one way to determine gender, especially with the smaller breeds like budgies and lovebirds.

However, without enough experience, and without the existence of another individual, there is no guarantee that you will guess the gender correctly. And this could lead to fighting and aggression, especially if you got two males in one cage attempting to breed or letting them live together as mates.

Most professional breeders and some pet stores actually have the right information about the gender of the parrot they are selling. Not all of them, but it’s worth asking. The previous owners who want to want to sell their birds or put them for adoption are also likely to know this about their pet.

So when buying or adopting a parrot, ask what gender is the bird. Some breeders will give the bird a leg ring with all information related to the bird, including the gender.

This is the most accurate method for determining the gender of your parrot or any other bird. And this is the method that I recommend for beginners. Do not guess, especially if you know all you got is observing how your parrots are behaving, and looking for dimorphic signs and marks, which not all parrots have.

And for professionals to perform this test, they need you to provide them either with a blood or feather sample that still has drops of blood at its base. Both kinds of samples need to be fresh and directly sent to the lab after extraction.

Here is a link for DNA testing for birds. You will find all you need to do to collect the DNA sample of your bird, whether you collected blood or a feather sample. You can also ask them to send you a kit, and after you collect the samples, you will need to send them back to them for testing.

And you will get the results after 5 business days. Just remember to send the package using the fastest couriers, since the lab needs them to be as fresh as possible.

Male and Female Differences in Parrots

There are notable differences between male and female parrots. Sometimes they need an expert’s eye to determine them, and sometimes they could be quite easy. This depends mainly on the parrot breed.

The coloration is one important factor to differentiate between the genders in parrots, and it could be easy to do for some breeds, and likely impossible for others.

For example, Eclectus parrots are easy to distinguish from males to female individuals, you can do it only by looking at the prominent color, the green id for males, the red is for females.

Other birds like African greys could sometimes possess the needed coloration to differentiate between males and females. But it needs an expert eye to determine the gender correctly.

Different coloration in African grey is not always visible, but one may notice that the tail of the male has more redness in it, lesser on the female’s tail.

Another example is the Rose Ringed parrot. As you can see from the previous picture, they both have predominantly greeny coloring their bodies, and the mark of distinction is the dark necklace around the male nick.

So, depending on your parrot breed, you might be able to determine his gender after doing simple research online looking for marks that differentiate between males and females.

The size is one more thing that could help you determine the gender of your parrot. Especially with relatively smaller breeds of parrots. Budgies, for example, the healthy male budgie has a bigger or bulkier body than the healthy female.

Yet, determining the gender depending on the size is harder, especially with only one individual. Basically, you need a couple to notice the difference in size between them.

When you interact with your parrot, you may notice a difference in behavior between them both. For females, they tend to be more aloof, or play carefully, or sometimes prefer not to interact more often. But for male parrots, tend to be curious and playful. They could show some aggression toward you, they may bite you, especially when you are around their cages, cleaning or refilling supplies.

Even with talking, male parrots tend to talk and imitate human sounds more often than females do. One behavior you should think about, does your parrot lays eggs, yes this is one of the clearer ways to distinguish females from males. Yes, female parrots can lay unfertilized eggs without the existence of a male mate.

In general, and to determine the gender by the behavior, you need a high level of expertise, otherwise, you just guessing. 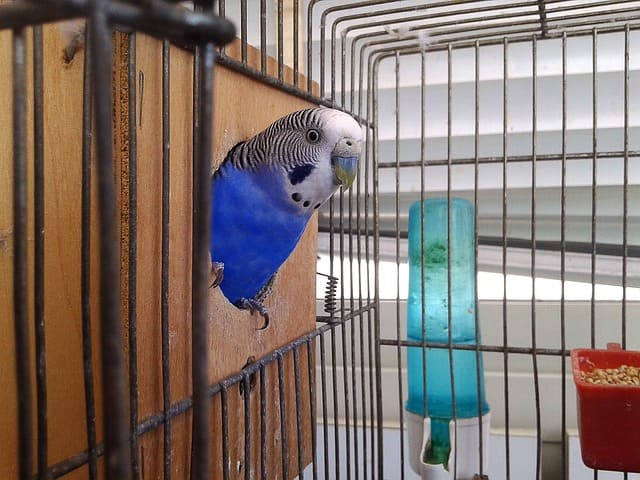