One tough aspect of raising parrots as pets is understanding their body language, unfortunately, most owners don’t exert the effort to understand the body language of their pets, and sometimes parrots show signs and indications through their body language. These signs could go unnoticed until the serious impact hits the bird causing it to require some serious health care, and if such signs were early in the owner’s mind it won’t require a lot of resources to handle and probably won’t put the pet’s life at risk.

However, one important sign that sometimes makes the owners fear that there is something wrong with their pet parrots is when the bird stands on one leg. In most cases, this sign is normal and doesn’t indicates something bad, and in fact, this sign can be a sign of a healthy bird.

And in this article, we will Anwer the question of Why Do Parrots Stand On One Leg. When it’s a bad sign when owners should worry and many more. So, grab your cup of coffee and continue reading.

So, Why Do Parrots Stand On One Leg?

Asking why do parrots stand on one leg is like asking why humans stand on two legs and this is because standing on one leg for parrots is something normal they perform as they move their body. Just like when they flap their wings or climb on the cages using their beak and claw. Basically, it’s about how their bodies are built to make them able to stand on one leg. Apart from that, parrots will stand on one leg when they are

When we humans sleep we always lay down on the bed either facing the ceiling or facing one of the sides. And this exactly happens with parrots, they have their own preferences when it comes to sleeping, napping, or relaxing. Sometimes parrots relax with their head under the wings and sometimes they will stand on one leg And sleep.

When parrots eat some strong nuts or pieces of chili they need first to grab the food, and their claws are the perfect tool to do that. And without their claws, they wouldn’t even be able to crack the nut and eat what’s inside and even if they have the food bowl in the cage they still need their claws to grab their food and eat it, especially the fruits and veggies. And this is a reason why do parrots stand on one leg.

As you know parrots don’t have feathers on their legs and basically, their legs are exposed to cold weather, so when it’s actually cold they may stand on one leg to warm up a bit, and you may notice them standing on each leg alternately and if you noticed that, make sure you provide extra warmth by increasing the temperature in the place.

Could Standing on One Leg Be A Problem?

In 99% of the cases of parrots standing on one leg, there is nothing to worry about, but what about the 1%? Could be there something that needs to be taken care of? And the answer is yes, sometimes parrots stand on one leg because there is something wrong with them. Here are the possibilities.

Sometimes when parrots spend their time out of the cage and even inside the cage their legs might his something that could injure them and sometimes the injury will prevent them from using their leg properly, this could lead the owner to take the parrot to an avian vet to assess if there is a serious problem with the leg.

If you noticed your bird standing on one leg for an extended time, then you have to check if the bird is able to use the other leg. You can lure it with food and try to manipulate it until you see the parrot using the other leg normally. Sometimes the injury can happen without bleeding so as an owner you have to pay attention to the bird and to the playing area and remove any dangerous objects like knives and forks.

The other reason is sickness sometimes certain illnesses can prevent the parrot from using its leg to stand and this will lead it to stand on one leg.

The first illness that could cause this is bumblefoot which starts with a reddish foot planter that could develop into a chronic and painful infection, and if left untreated it could cause blood poisoning and bone infection. A bumblefoot problem can happen to the parrot after something sharp has punctured its foot.

The second illness is gout which happens when uric acid gathers in the ligaments and tendons. Gout affects the leg and wing joints.

However, these sicknesses happen on rare occasions and in bad environments, and in most cases, owners shouldn’t worry about their parrots standing on one leg.

Do All Parrots Stand On One Leg?

In conclusion, parrots standing on one leg means that their bodies function healthy and normal as it’s one of the ways parrots use their bodies to move and climb and play and grab food. Sometimes and on very rare occasions parrots may avoid standing one leg because it hurts them, especially after an injury that caused a bruise or wound, and if this is the case owners should head directly to the nearest avian vet for the care the bird needs.

However, as mentioned it’s unlikely to happen to the bird and if does, other signs and symptoms will be the base of diagnosis, and standing on one leg won’t make any vet sure about if the bird is sick or not.

Owners should just provide a safe place to raise the pet and take care of the diet and never let the protein intake of the parrot exceed 25% of the food as it could damage the kidney and this could lead to gout.

Ana yup that’s about. I hope you found this article informative and easy to digest. Thank you for reading… 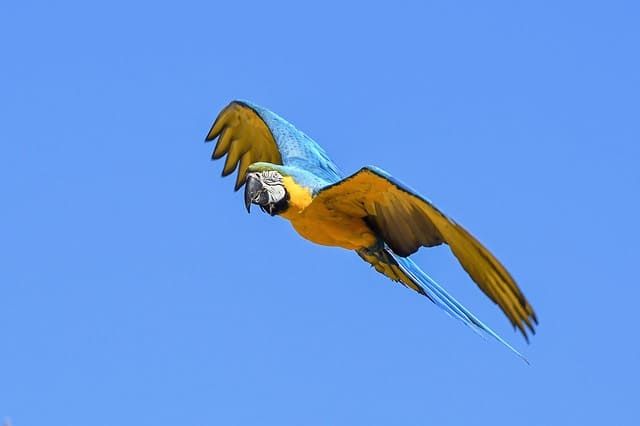